When Lauren Aggen was born on December 22, 1989, she had three days left to live.

Aggen, 32, was born with hypoplastic left heart syndrome. The doctors said that if she didn’t receive a heart transplant within three days, she would die.
“So if you do the math, three days would have been Christmas,” Aggen said.

But Aggen lived eight days, and as doctors told her parents they should take her off the transplant list due to her rapidly declining condition, the phone rang.

“A little boy had died of Sudden Infant Death Syndrome in Austin, Texas, and they thought the heart would be a match for me,” Aggen said.

“The doctor flew from Chicago to Austin, TX and got the heart,” Aggen said. “There was a snowstorm, but they gave me the heart and put the heart in my body, and it just started pumping. I am now 32 years old and I have the same heart.

The drugs Aggen is taking for her heart are damaging her kidneys, but she didn’t need a kidney transplant.

“The drugs I take for my heart are damaging my kidneys, so I have kidney failure,” Aggen said. “So at the moment I don’t need a kidney transplant, but in the future it’s a possibility.”

Aggen’s hearing was also damaged by medication she took as a baby while expecting a heart. She is fluent in American Sign Language and hasn’t let any of her physical obstacles get in the way. The Indianapolis resident works for the federal government near Lawrence and lectures across the United States on organ donation. 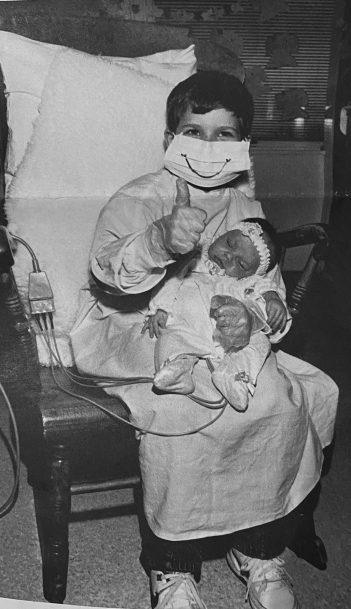 Lauren Aggen’s brother David held his sister when she was a baby. (Photo courtesy of Lauren Aggen)

“I went to school and got involved with Donate Life (a non-profit organization that advocates organ donation),” Aggen said. “I like to raise awareness in the community about organ donation awareness. I also like meeting people. I like talking to people. »

As a teenager, Aggen fell ill and was the recipient of a Make-A-Wish Foundation wish.

“The Make-A-Wish Foundation came to my bed and said, ‘Lauren, what do you want to wish for?’ And I wanted to write a book to thank my donor family for making life possible,” Aggen said. “I was very sick and I didn’t know if I was going to make it.”

With the help of Make-A-Wish Foundation, Aggen published a book called “Austin’s Gift”, because her heart came from an Austin family. Donor recipients can write a letter to their donor family, who can accept or decline the letter. Aggen wrote a letter but never received a response.

“I went to Austin, Texas to give a presentation at the Texas School for the Deaf and went to the library and looked through the obituaries, but couldn’t find anything,” Aggen said. “I have never met my donor family.”

The heart transplant had an impact on other people in Aggen’s life. His brother, David Aggen, became a doctor.

“I impact other people in different ways, and if it wasn’t for me, my brother might not be a doctor. Now he’s an oncologist and helps others,” Aggen said. am very grateful for my life.I would never want to force anyone to become an organ donor, but my life has been greatly impacted because of organ donation.I feel a purpose and a need to let people know.

Aggen and her husband, Stephen Sweet, live in Indianapolis.

A “poster child for the transplant program”

Lauren Aggen received a heart transplant when she was 8 days old. She is now 32 years old. Her mother, Janet Aggen, said that when Lauren was little she became involved in different aspects of organ donation.

“She was often kind of a poster boy for the transplant program in Chicago,” Janet Aggen said. “We met a lot of interesting people. We met families whose donor members had died. Talking to them, what we learned is that what has often helped them in these tragic times is that they have seen something positive coming out of the situation. It is a magnanimous gift. In their time of grief and grief, they might seek to help someone else. How wonderful.

“As we met these people, they talked about how comforting it was that their child was carrying on in a new way.”

First pig-to-human heart transplant may have failed due to pig virus, report says

Topline A Maryland man who died with no clear cause two months after receiving the first-ever genetically-modified pig heart transplant may have fallen victim to a pig virus linked to transplant failure, the patient’s doctor has found, according to MIT Technology Review. A pig’s heart used in scientific research. Getty Highlights David Bennett Sr., who […]

Newark As we approach the New Year, Bernard China, 58, Newark, NJ, and his family and friends count their many blessings. According to NJ Sharing Network officials, Bernard also takes time to reflect on the gift of life and the miracle of organ and tissue donation and transplantation as he celebrates the first anniversary of […]

ROBERTSDALE, Alabama (WKRG) – A family in Baldwin County is asking for prayers this month as their two-year-old daughter prepares for a heart transplant. Evelyn Kubicz was born with a rare heart defect and now she’s on a waiting list, stuck in a Birmingham hospital until a match is found. She was born with hypoplastic […]