Despite its rarity, with an estimated incidence of 8 to 150 cases per million, myxomas are the most common type of benign primary heart tumor [1]. Their clinical spectrum varies with size, location, and mobility, with the vast majority developing in the left atrium. The difficulty in detecting them is correlated with the absence of specific signs and symptoms; from asymptomatic patients to life-threatening complications [2-4]these benign tumors require early diagnosis and referral for urgent surgical treatment.

The authors report the case of an 80-year-old woman, hitherto independent in her activities of daily living, with a personal history of arterial hypertension, obesity, dyslipidemia and hyperuricemia, treated with diuretics and antihypertensives.

She presented with dyspnea on exertion for about three weeks, which progressed to dyspnea at rest, orthopnea and paroxysmal nocturnal dyspnea. In association with this escalation of symptoms, she described intermittent fever for four days and a productive cough. On physical examination, there were clear signs of respiratory distress, with polypnea at rest, supraclavicular retraction and use of accessory muscles. His heart rate was 100 bpm, blood pressure 100/55 mmHg, peripheral oxygen saturation 85% (FiO2 0.21), and body temperature normal. She had cold extremities but no signs of poor circulation, jugular vein distention, hypophonic sounds, no heart murmurs or galloping rhythms on heart auscultation, and lung auscultation with bilateral crackles, with no significant peripheral edema. Faced with respiratory effort and peripheral desaturation, the patient immediately began non-invasive mechanical ventilation (NIV) with high support pressures and supplemental oxygen therapy, titrated up to 15 L/min.

Thus, the patient was admitted to hospital with the diagnosis of acute congestive heart failure, most likely decompensated by community-acquired pneumonia, with severe type 1 respiratory failure, dependent on NIV and supplemental oxygen therapy. Empirical antibiotic therapy with ceftriaxone and clarithromycin was instituted in this context. 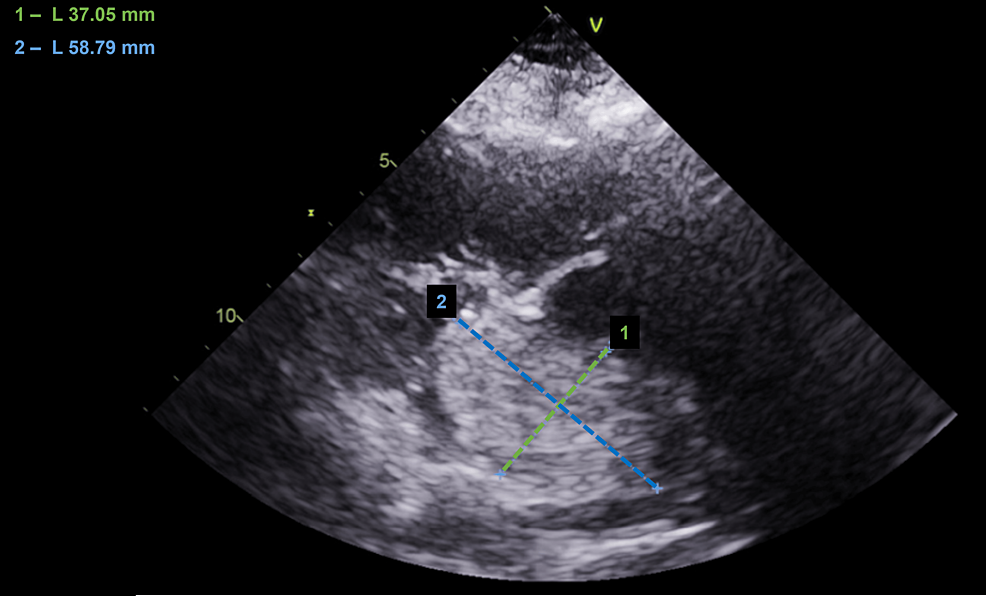 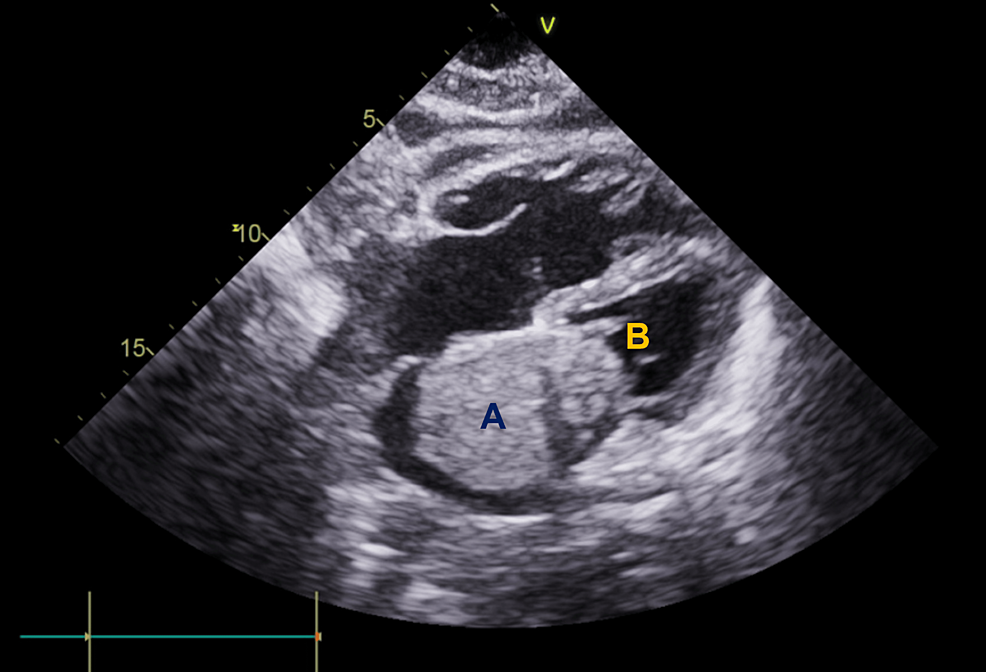 Figure
3: Transthoracic echocardiography with a clear intracardiac mass (A) obstructing the mitral valve (B) in diastole.

Therefore, given the suspected diagnosis, the absence of active infection and the analytical improvement, the patient was transferred to the cardiac surgery department and subjected to an urgent excision of the auricular mass, without any intraoperative complications. His histopathological examination confirmed a “hypocellular tumor with myxoid stroma, with the presence of erythrocyte extravasation and fibrin, without signs of malignancy, measuring approximately 70 mm in diameter and weighing 72 g, compatible with an atrial myxoma”.

Approximately one week after surgery, the patient showed no signs of respiratory distress, tolerating the NIV weaning process well. NT-proBNP improved to 5200 pg/mL and transthoracic echocardiogram on day 10 after surgery showed preserved systolic function and PASP of 53 mmHg, with no further pharmacological treatment.

On day 15 after surgery, the patient developed nosocomial pneumonia complicated by septic shock, requiring reintubation and vasopressor support. Meropenem was immediately started. Blood cultures were negative but the sputum specimen was positive for Serratia marcescens and Klebsiella pneumoniae carbapenemase-producing isolates. She was started on amikacin in combination with meropenem according to the antibiogram profile but there was no response to the instituted treatment and the patient died 11 days later.

Primary cardiac tumors are rare, with an incidence that varies between 0.0017 and 0.03%, with secondary cardiac lesions having an incidence 30 times higher. About 75% are benign tumours, with myxomas being the most common. [2,5], with a higher prevalence in women (2:1) between 50 and 60 years of age. Atrial myxomas are generally sporadic, but they can occur more rarely in familial form, in younger individuals, with an autosomal dominant mode of inheritance, generally associated with other lesions (eg Carney complex) [2, 4-6].

Its clinical manifestations are diverse, ranging from masses detected accidentally in asymptomatic individuals to symptoms related to cardiac obstruction, systemic embolization mainly in the central nervous system, direct invasion of the myocardium or adjacent pulmonary parenchyma, or even signs and constitutional symptoms. [2, 4-6]. The latter is justified by the release of pro-inflammatory factors by the tumor and includes fever, weight loss and myalgia, among others, also explaining the possible increase in CRP, leukocytosis, thrombocytosis/thrombocytopenia and anemia. [2-5].

In symptomatic and large left atrial myxomas that cause a barrier to intracardiac circulation, one can understand the development of typical symptoms and signs of heart failure, namely dyspnea, orthopnea, paroxysmal nocturnal dyspnea, pulmonary edema and fatigue, in the vast majority of patients. having pulmonary hypertension at the time of diagnosis [2,4-7].

Therefore, the difficulty in reaching a final diagnosis in this particular case is understandable, given the frequency of patients with the above symptoms admitted to an internal medicine ward: severe congestive heart failure (NYHA class IV) in an elderly patient with multiple cardiovascular risk factors, systemic arterial hypotension, and prerenal acute kidney injury. Symptom relief and heavy reliance on NIV with high stance pressures, due to the consequent reduction in preload, led to the suspicion of a primary cardiac cause for the persisting signs and symptoms.

Transthoracic echocardiography remains the first-line examination allowing a presumptive diagnosis of myxoma and a summary characterization of the tumor (location, size, mobility and impact on cardiac function). It can be followed by transesophageal echocardiography for better morphological characterization. Cardiac CT scan and magnetic resonance imaging (MRI) are alternative non-invasive tests that can also identify the presence of a cardiac mass. In fact, cardiac MRI can provide data to further clarify the diagnosis, being more effective than echocardiography in determining the nature of cardiac lesions and differentiating myxomas from other cardiac masses. Definitive diagnosis requires excision of the tumor and pathological confirmation [4-6].

Surgical treatment is crucial, usually curative, and in most cases associated with rapid regression of clinical and biological results. Therefore, cardiac myxomas are a treatable cause of heart failure [2, 4-6]. Nevertheless, although it is a benign tumor, its morphological characteristics and location can lead to life-threatening cardiovascular complications, and recovery will always depend on the patient’s functional reserve.

Although most patients with cardiac myxomas do not have specific symptoms that mimic other common diseases, if the suspicion is high, the diagnosis can be easily made using non-invasive procedures. Surgical resection remains the mainstay of treatment, preventing the dreaded complications, with rapid resolution of clinical manifestations, generally with an excellent long-term prognosis.

Heart failure in obesity: insights into proteomics in patients treated with or without bariatric surgery

Some heart failure patients may benefit from stem cell therapy

According to a study presented at the 2021 Scientific Sessions of the American Heart Association. The researchers found that this improvement was especially pronounced in patients with higher levels of inflammation. The hospitalization rate has not been reduced. “Cell therapy has the potential to change the way we treat heart failure,” said Emerson C. Perin, […]

November 19, 2021 – Stem cell therapy helped reduce heart attacks, strokes and deaths in people with high-risk NYHA class II or III chronic heart failure with fraction d reduced ejection (HFrEF), especially in those with reduced ejection fraction (HFrEF) inflammation levels, but hospitalization has not been reduced, according to late-breaking research presented at the […]