A 14-week-old baby in urgent need of heart surgery has had his operation canceled four times in the past two weeks as hospitals are overrun with Covid patients.

Amelia Rehn was born with congenital heart disease and is awaiting her stent at the Royal Children’s Hospital in Melbourne.

She had her first stent implanted at just two days old, but now needs a replacement as she gets older.

Her anxious parents, Brad and Jessica Rehn, from Tasmania, have been with Amelia in hospital and say they still don’t know when their daughter will have surgery.

“She spends most of her day sleeping because her body uses so much energy trying to keep going.”

Amelia Rehn was born with congenital heart disease and is awaiting her stent at the Royal Children’s Hospital in Melbourne. Her parents Jessica and Brad Rehn have been by her side as she awaits surgery

Ms Rehn stayed with her daughter in hospital, but current rules mean only one parent can sleep there, so her husband is staying at Ronald McDonald House.

He said it was unbearable not knowing when a surgery position might open up for Amelia.

“Nobody told us when we’re going to get it,” he said.

“The anxiety and stress of it all is pretty hard on us.”

Surgery is recommended for babies aged 10 to 12 weeks, which means Amelia is already overdue.

“She’s definitely overtaking the shunt that’s in there,” her mother said.

“We were hoping she would have surgery before she started showing major signs that needed replacing, like turning blue and needing oxygen.” 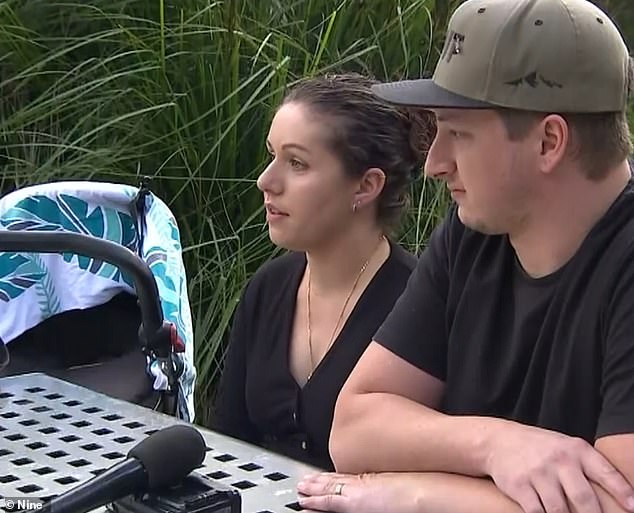 Surgery is recommended for babies aged 10 to 12 weeks, which means Amelia is already late

The couple said that while the staff were “amazing” they could see the “stress” on their faces as they walked into Amelia’s room without any updates.

Ms Rehn earlier told Nine News that she and her husband were “exhausted”.

“There are not enough beds and the system is down and there is no room,” she said.

More than 89,000 Victorians were awaiting surgery at the end of March, including those in need of urgent care – according to the Victorian Health Information Agency.

On Monday, there were 773 Covid patients in hospital and 40 in intensive care.

State health director Brett Sutton said Victoria was past the peak of infections, but added that “the pressures on the health system will persist for some time to come”.

During the first months of her life, Teniola Akinbani was full of life, now at 14 months she needs a test and corrective heart surgery at two hospitals more than 180 kilometers apart. Weighing 3.2kg at birth, Teniola now needs 3.5million Naira to first undergo a cardiac catheterization test at Babcock University Hospital in Ogun […]

Recovery after heart surgery can be painful. But a new study suggests that patients don’t need potentially addicting prescription opioids to control this post-operative discomfort. “This study shows that discharge without opioid pain reliever after cardiac surgery is extremely well tolerated by some patients. In other words, we should not reflexively prescribe pain relievers to […]

November 15, 2021 The chance to be closer to home brought Dr. Phillip Burch to the Mississippi Children’s Hospital. Now as the head of pediatric cardiothoracic surgery, he wants children and families across the state to have the same opportunity of care. Burch, from Alabama, joined the Heart Center leadership team at the state’s only […]